Have you suffered a ruptured uterus after giving birth, or during childbirth? If so, and your uterine rupture could have been avoided if the medical staff treating you had not been negligent, you could be eligible to claim compensation for this kind of clinical negligence. If this is the position you are in, then you may be wondering what compensation amounts could be appropriate for your settlement.

Within this guide, we offer an example of how ruptured uterus compensation payouts could reach £200,000. To provide you with more information on making such claims, you will also find information regarding different types of uterine ruptures, how they could be treated, and how we could help with medical negligence compensation claims of this type. If you are in any doubt about whether your childbirth injury could lead to a claim, or you are looking for advice on retaining the services of a medical negligence lawyer for your claim, our helpline advisors could help you. The number to call is 0161 696 9685. However, we could have provided the answer to your questions below. Why not take a look at the sections below to find out?

Jump To A Section

What Is A Ruptured Uterus? 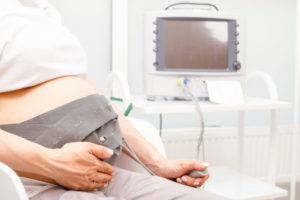 This could cause severe haemorrhaging as well as risk to the baby and mother’s lives. Not only this, but it could lead to further risks to future pregnancies, or even a woman’s ability to bear children in the future. If you have suffered a uterine rupture due to clinical negligence, whether as a result of a delayed caesarean section, the overuse of drugs to stimulate contractions or another form of negligence, you may be able to claim compensation. You could claim for the injuries you’ve suffered, as well as the financial implications that the injuries have had on you.

Ruptured uterus symptoms may not be specific, which could make diagnosis and treatment complicated. The most common presenting symptom could be severe abdominal pain that continues between contractions, but other symptoms could include pain in the shoulder tip, and bleeding from the vagina. On examination, signs of a patient having ruptured their uterus could include regression of the presenting area, as well as tenderness of a scar. Uterine parts and foetal parts may also be felt upon palpation. The patient could also show signs of shock from bleeding, such as hypotension and tachycardia.

What Happens If Your Uterus Ruptures?

This type of injury would class as a medical emergency as the foetus and uterine contents could spill into the peritoneal cavity. Therefore, you would need to undergo a caesarean section, and the foetus would need to be delivered.

How Is A Ruptured Uterus Treated?

If you’re wondering can a ruptured uterus be repaired, this would be assessed on a case-by-case basis. In some cases, you may be able to have the uterus surgically repaired, while in others, you may need a hysterectomy.

Can You Die From A Ruptured Uterus?

A uterine rupture could be very dangerous for the patient, as blood loss could be massive. If this occurs, then the patient could be at significant risk of death.

Can You Get Pregnant After A Ruptured Uterus?

If your ruptured uterus has been repaired, you may wonder whether you can have a baby after a uterine rupture. While the advice to women who have suffered this type of rupture is not to attempt to get pregnant, some women have fallen pregnant after a ruptured uterus, and future pregnancies, while considered risky, could be possible.

What Causes A Ruptured Uterus?

A uterine rupture is usually caused by childbirth or pregnancy. However, the uterus could also be ruptured due to perforation, which could happen in an accident if it caused an object to pierce the abdomen. This guide, however, concentrates on uterine ruptures that could lead to medical negligence compensation claims.

5 Causes Of A Ruptured Uterus

While a ruptured uterus could be considered to be rare,  it could occur because of a variety of reasons. These could include:

If any form of medical negligence has caused your uterine rupture, whether it is due to a delayed caesarean section, the overuse of uterotonics, or another type of clinical negligence, you could look into claiming compensation for a negligent birth.

As mentioned earlier, this example explains how ruptured uterus compensation amounts could reach £200,000. The case study involves a woman who had previously had a baby via an elective caesarean section. During her next pregnancy, she advised her specialist that she wanted to try and give birth naturally, which the specialist confirmed was a possibility. The woman was induced two days after the full 40 weeks of pregnancy, an extended labour led to her undergoing an emergency caesarean in which it was found that her uterus had ruptured.

The woman sought the assistance of a solicitor to make a claim for compensation because there was no warning given about the high risk of giving birth naturally. She also claimed that she should have been given a caesarean section initially. There was also an argument that the claimant’s caesarean section was delayed.

The woman was left with a disability caused by her childbirth injury. The compensation payout she received included both general damages for the injuries themselves as well as poor fertility prognosis, as well as special damages for costs incurred and loss of income.

If you were looking for a ruptured uterus compensation calculator, you might find the information below helpful.

Below is a table that contains guideline compensation amounts for injuries that could relate to a ruptured uterus. We have included this as an alternative to a personal injury claims calculator, as it provides figures taken from the Judicial College Guidelines. If you have suffered injuries other than those included below, a Legal Helpline advisor could provide you with guideline payout brackets for other injuries over the phone.

As well as the general damages you could receive for the suffering and pain of your uterine rupture; you could also claim ruptured uterus compensation payouts for costs that have been incurred as a consequence of having your uterus ruptured. These could include travel costs, medical expenses and lost wages. This could affect ruptured uterus compensation amounts significantly.

You could choose to pursue a claim with assistance from a lawyer. If you do, and you choose a solicitor that works on a no win no fee basis, you would not have to pay them upfront for their services. The payment terms and conditions for a no win no fee claim are documented in a Conditional Fee Agreement. You would be required to sign such an agreement before the solicitor could begin working on your claim.

How To Claim For A Uterine Rupture Due To Medical Negligence

You may be wondering how complicated a uterine rupture claim could be, and whether you could claim without a solicitor to help you. While you could go ahead with a negligent birth claim without legal assistance, we would recommend you consider using the services of a solicitor. A trained solicitor could help make the whole process less stressful for you, and you could rely on them to fight for the highest ruptured uterus compensation payouts possible for your claim.

Finding the most appropriate solicitor for your needs could be something we could help with. Not only could we provide an initial assessment of your case, to see if you could be eligible for compensation, but we could also provide you with a solicitor from our panel with the appropriate experience to handle your clinical negligence claim. Whether you have suffered a ruptured uterus in childbirth or after giving birth, we could offer the help and guidance you need when it comes to claiming compensation.

Start Your Claim With Legal Helpline

If you are now considering starting a claim, or have further questions relating to your claim, then getting in touch with us is simple. All you need to do is call 0161 696 9685 to speak to an advisor, or you could opt to fill out the contact form, and one of the team will get back to you.

We look forward to helping you with your claim.

Below, we have included some useful resources surrounding this type of injury, as well as other claims information that you may find useful.

If Hospital Negligence Results In Death – If you are reading this because you lost a loved one because of a uterine rupture, then this guide could be of use.

Claims Guidance – Here, you can read more about how we could help with your claim.

Road Accident Claims – If you have had a ruptured uterus in a car accident, then this guide could help.

The Risk Of Rupture – This NHS page covers the risks of a caesarean on the womb.

Maternity Guidelines On Ruptured Uterus – Here, you can find resources from University Hospitals Plymouth NHS Trust that cover this type of injury.

Management Of A Ruptured Uterus – This document shows the protocol for ruptured uterus cases from the Mid Essex Hospital Services NHS Trust.