By Daniel Manning. Last Updated On 15th March 2022. Any cyclist who’s ever fallen from a bike will tell you how painful it can be. The injuries sustained in a bike accident can be terrible due to the lack of protection provided by the bicycle. Those injuries can be made worse if you’re a cyclist hit by a car and thrown from your bike. In these circumstances, we believe it’s only right that, if the driver can be shown to be responsible for the accident, you should consider claiming compensation for your injuries.

In this guide, we’re going to look at what injuries can be caused if you’re knocked off your bike. We’ll also look at a case study where a cyclist hit by a car was awarded the biggest ever compensation payout for his injuries. Finally, we’ll provide a personal injury claims calculator so you can see how much compensation might be awarded for your injuries.

Legal Helpline can help you if you’ve suffered injuries in a cycling accident. Our advisors can provide free advice and a no obligation assessment of your claim. If the case has a chance of being won, you could be introduced to one of our panel of no win no fee solicitors. To discuss your claim right away, please call 0161 696 9685 today.

Alternatively, to find out more about when you could make a claim, please continue reading.

Jump To A Section 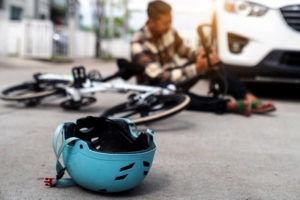 If you’re a cyclist who’s hit by a car, the potential for life-changing injuries is much higher than if you were driving the car. That’s because, when you’re thrown from a bike, there is nothing to protect you like a seatbelt would in a car. The case study later in this guide provides a real example of the types of injuries that can change lives forever.

While some injuries may cause pain and discomfort for the rest of your life, others can have a dramatic affect on your ability to work. These are the types of factors that need to be taken into consideration when compensation is awarded. This is where a personal injury solicitor can really help. They should have the experience to ensure evidence is provided to cover all the ways in which you’ve been affected by an accident and subsequent injuries.

Injuries Sustained By This Cyclist

In the case study we’re going to look at, the cyclist sustained some very serious injuries that will affect him for the rest of his life. It’s not just the injuries that are compensated for though. As you’ll see later, factors such as the cost of care, modifications to the home and loss of earnings can all be considered when claiming.

The cyclist hit by a car in the case study suffered the following injuries:

These, as well as the other factors mentioned earlier, led to a record compensation payout in the UK.

Now we’re going to look at some common causes of cycling accidents. Remember, you could be entitled to make a compensation claim if you can prove that another person caused the accident through a negligent act.

Now, before we move on to our case study, we’ll take a look at some of the most common injuries sustained by cyclists in road traffic accidents.

Remember, you can claim for any type of injury if it was caused by another road user’s negligence. Those listed here are just some of the more common. You could even claim if you weren’t wearing a helmet, although the amount of compensation paid might be reduced.

Case Study: £14 Million Compensation Payout For A Cyclist Hit By A Car

Now we’re going to look at a case study involving a cyclist hit by a car who received a record compensation payout for his injuries.

Manny Helmot was awarded £14 million compensation after suffering brain injuries, losing the use of his right arm and also suffering partial blindness after being knocked off his bike in 1998. The injuries mean that he’ll never be able to ride a bike, drive or ride a bike again. He now needs 24-hour care as he’s unable to manage on his own.

Mr Helmot had competed as a cyclist in the Commonwealth games a few months prior to the accident. He had planned to ride professionally but that dream was terminated after the extent of the injuries was revealed. Following the accident his mother had to give up work to provide full time care for her son. Modifications to the home were also required.

Dylan Simon, the driver of the car, was convicted of dangerous driving. The claim made by Mr Helmot’s mother was against Mr Simon’s insurers.

In total, £13.75 million was awarded to cover the pain and suffering caused by the injuries, the future loss of earnings and the cost of caring for Mr Helmot for the rest of his life. The funds will be placed into a trust fund by the courts.

The case was heard at Guernsey’s appeal court who agreed to increase the award from £9 million that was previously awarded.

What Is The Average Compensation For Being Knocked Off A Bike?

If you are a cyclist and have been hit by a car, then compensation may be owed to you if you can prove that the accident was caused by another road user’s negligence. But how much could your claim be worth?

Unfortunately, there is no specific answer we can give that would be applicable to everyone’s circumstances. Every compensation claim is different. That means that there are various factors that come into play when your compensation is being calculated.

First, we have the figure called general damages. This is the sum that is calculated to address the claimant’s pain and suffering caused by your injuries. These injuries can be physical or mental. The Judicial College Guidelines (JCG) is often used to help value claims alongside medical evidence. The JCG is a publication containing bracket compensation figures for various types of injuries at differing severities.

We’ve included some example entries from the JCG in the table below.

In addition to general damages, it’s also possible that you may be owed special damages. This is when you can reclaim certain losses and/or expenditures that would not have taken place if not for your injuries. For example:

If you have any questions about what else could be included, get in touch today.

No Win No Fee Cyclist Hit By A Car Compensation Payouts

When claiming compensation as a cyclist hit by a car, you might worry about how to pay for the solicitor’s fees. That’s why our panel of solicitors work on a no win no fee basis when they take a claim on. This allows more people to begin a claim as there’s less stress due to their financial risk being lowered.

When you work with a solicitor offering a no win no fee service, you’ll begin by signing a conditional fee agreement (CFA). This document is important because it shows that you don’t pay the solicitor’s fees if they lose the case. If they win, however, the CFA will explain the success fee you’ll pay.

How To Claim Compensation As A Cyclist Hit By A Car

To make a bicycle accident claim, you’ll need to provide evidence that demonstrates what happened, who was to blame and what injuries you sustained. Having this sort of evidence improves your chances of making a successful claim. Therefore, here’s what to do if you’re a cyclist hit by a car:

You should also remember that there is a 3-year personal injury claims time limit. In normal circumstances, this starts from the date of your accident. However, if you’re knocked off your bike by a car, you might be incapacitated for some time. Therefore, the time limit would start when you became aware of your injuries.

Hopefully you’ve found this guide about compensation payouts for a cyclist hit by a car useful. If so, we hope you’re now ready to begin your claim and would like to use Legal Helpline to assist you. If so, here’s how to start your claim:

For all personal injury claims, we start by offering a no obligation assessment of your claim. If the case is strong enough, we could introduce you to one of our panel of personal injury lawyers. Should they agree to take on your claim, it’ll be on a No Win No Fee basis. If you’re a cyclist who was hit by a car, you can contact our advisors any time, night or day, to begin your claim.

Now that you’ve read all of the information about compensation amounts paid for a cyclist hit by a car, here are some more of our guides that we hope you’ll find helpful:

Road Traffic Accident Claims – This guide covers all sorts of road traffic accidents that can lead to a personal injury claim.

Arm Injury Claims – In this guide, you can find out compensation amounts if you’ve lost use of an arm or suffered fracture in the upper or lower arm.

Other Claims We Could Assist You With

Finally, here are some external resources that you might find useful:

BRAKE – The Road Safety Charity – Information and advice on road safety for all road users.

The Highway Code – Information on bicycle law and all the other rules of the road.

Sharing The Road – A guide from ROSPA (a safety charity) on how bicycles and cars can share the road together safely.